Little People, BIG DREAMS is a best-selling series of children's books that explore the lives of outstanding people. All of them achieved incredible things, yet each began life as a child with a dream. In one of the new releases you can now discover Elvis.
This book might be just in time, because it seems as if we have reached a point in time where journalists have to explain to the younger generation who Elvis was. Hopefully they now know!
The synopsis for Little People, BIG DREAMS:
Elvis was born into poverty in North Mississippi, a place where opportunities were a rare thing to see. Still, he felt that someday, somehow, something amazing would happen. When he sang in a school talent show, he realized that singing was all he wanted to do with his life.

He had just finished high school when he plucked up the courage and walked through the doors of Sun Studios, ready to record his first song. After this came hit after hit, and he popularized a new genre of music that mixed all kinds of different styles. That genre was Rock 'n' Roll, and it would take the world by storm!

All the great artists that came after him still look up to little Elvis, the King of Rock 'n' Roll, the unique and irreplaceable artist who changed the course of music history.

From Dick to Roy

Dick Guyton has been the executive director of the Elvis Presley Memorial Foundation that has overseen the Elvis Presley Birthplace and Museum in Tupelo for the last 20 years. At 82 he has decided it is time to slow down.  He started working at the Birthplace in 2002 (when the EPFCA started to meet up.)
The Tupelo Convention and Visitors Bureau several years ago did a study on people coming into the city and it was estimated that the taxes that Elvis brings in is roundabout R18 million each year in revenue for Tupelo. More than a million guests have visited the Elvis Presley Birthplace and Museum since Guy came on board.
The new executive director is Tupelo's Roy Turner, an avid Elvis fan and key to the writing of the excellent book Elvis and Gladys by Elaine Dundy, who dedicated the book to Roy for his exceptional work.

In an interview Guyton said:

I have enjoyed every minute of every day. It has been fun and it's been a great ride, a real pleasure to serve the community as well as all the international visitors that we've had. Our board of directors have been looking to continue to improve the place but at the same time to keep it to how the fans want it to be, because that's what we're all about. 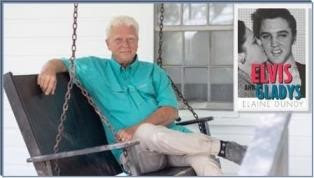 The Making of Jailhouse Rock

This FTD CD/Book package is the ultimate background story into how the MGM movie Jailhouse Rock was created.

- 2 x Hardback coffee style deluxe books about the making of the movie and the music. Inside are lots of newly discovered photos and details about the script, shooting schedule, memos, contracts and session information, and memories from the cast and crew.

- 3 x Compact Discs of the complete recording sessions. For the FIRST time ALL tracks from the original binaural 2-track tapes are mixed into mono, sequenced in recording order.

Released for the first time are the COMPLETE takes of the instrumental version of Baby I Don't Care, featuring Elvis on bass (after Bill Black failed to lay down the opening riff of the song.)

This marvellous FTD escape has flown from the shelves of fan club shops but is still available at elvisthemusic.com for R4,313.00 (S&H not included) at the moment.

Lucas Maree, I could do with a million, too! 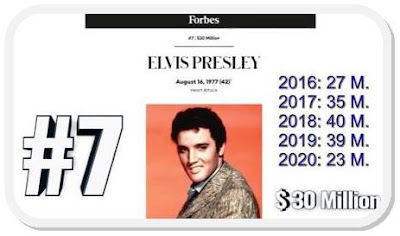 Last time Elvis was #7 on the Forbes List of highest paid deceased celebrities to the amount of $30 million.

Due to Parker having arranged for Elvis' 1954-1972 catalogue to be sold to RCA, Elvis doesn't earn any monies from that.

In the meantime, Graceland has landed new partnerships. These include the new Elvis Presley Channel which debuted this year, and in the spring Netflix will premiere the animation series, Agent King.

In 2022 we celebrate all things Elvis in 1972, especially the Golden Globe Award winning film, ELVIS ON TOUR. It's been 50 years. 50. And still, hours of unreleased footage of this rockumentary are sitting in the vaults. Just waiting to be released. Ander here's the kicker: At least 4 FULL evening shows were filmed for this documentary. 4.

MGM did make a killer documentary in 1972, but only incorporated some performances. We want more. In fact, we want it all. No less than an Extended Edition release including all available performance, rehearsal and candid footage.

There really is NO good reason NOT to release the rest of the available footage. Maybe Warner have thought Elvis was no longer in demand for cha-ching. If so, the new Elvis film has completely disproven that theory. ELVIS (2022) is riding high in numbers and ratings and has caught the fancy of the new generation.

Come on, Warner, strike the iron while it's hot and please release the remaining Elvis On Tour (1972) footage.

Of the seminal icons to emerge in the 1950s - Elvis, James Dean and Marilyn Monroe - it is Elvis who continues to move people in a way that many of the artists no longer can.

So, why Elvis?
Author Paul Simpson finds 10 reasons. Maybe you can find more.
1. The name.
The first name only was unique in popular culture at the time. And he's was real. Once heard, it is never forgotten. There is only one Elvis.

2. The voice.
Often imitated, yet utterly distinctive, technically superb, with a range of at least 3 octaves, it has a versatility that others simply can't match.

3. The look.
Elvis was the most beautiful male star of his era. And he intuitively understood the importance of the look, of which he was his own art director.
4. Timing.
He was a hurricane of fresh air after a decade of ration and recovery, and shockingly original.

5. The myth.
Elvis' life followed the pattern of a Greek myth: the most famous person in the world at 21, deceased and disparaged at 42.
6. The marketing.
He received unprecedented initial exposure and restricted media access, making him the ultimate unreachable star.
7. The mystery.
The known unknowns about Elvis are as great as the known knowns. Outside of his music and movies, through which he seemed like a friend, we never got that close to him. Yet he affected us intensely.

8. He only bored us in some movies.
Elvis never felt obliged to lecture us about politics, other performers, religion or how we should live our lives. As such he was a blank canvas onto which we could all project our fantasies of who he was and what he was like.
9. He was ridiculed.
Parker often made it easy for critics to sneer but the abuse only solidified his fanbase. Once you've endured the embarrassment of Elvis singing Old Macdonald on the back of a truck, you know your devotion cannot be tested again.
10. He had a unique aura that can't be reduced to mere charisma.
Maybe it was the loss of his twin, maybe the sometimes retreat to intense loneliness, maybe the haunting tale of his life and death, but many - from his dentist to movie director Sidney Lumet - felt there was something otherworldly about him.
So, how will you commemorate the 45th anniversary of Elvis' passing today? I will be in the cinema (again) and on my way over there put the music of An Afternoon in the Garden on full blast!
Posted by Nicolette at 17:48:00 No comments: