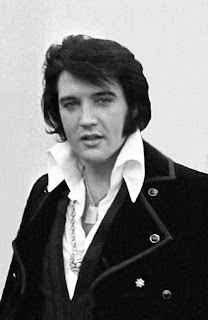 Finally. Someone whose work and word can be respected by the general public gives his verdict re Elvis' cause of death.

Dr Stephen Kingsmore, a genetic scientist who has been named one of Medscape's physicians of the year and has had his work featured among Time Magazine's Top 10 Medical Breakthroughs of 2012, has established the exact cause of Elvis' death - and ultimately put to rest the commonly accepted drug-related death theories, often smugly alluded to by authors, the media, and also, fans.


Dr Kingsmore's DNA-based findings - now being accepted in medical circles as the definitive explanation as to why Elvis passed away - were featured in the UK Dead Famous DNA TV program. The doctor analysed a sample of Elvis' hair which pointed to the singer having suffered from hypertrophic cardiomyopathy - a disease which causes the thickening of the heart and weakening of the heart muscle.

Elvis displayed many of the symptoms of this disease, including an irregular heartbeat, fatigue, fainting and high blood pressure. Although it was officially recorded that Elvis had died of heart failure, constant speculation about his demise has continued for nearly 40 years.

Dr Kingsmore stated: There has been so much speculation about cause of death, and so much ill spoken of his lifestyle, and we had this intriguing finding that possibly Elvis had a medical illness, and all of the stuff about how he killed himself with his lifestyle might have been very unfair.

Source: Belfast Telegraph
Posted by EPFCA at 15:41:00 No comments: