A Star is Born - A Missed Opportunity for Elvis? 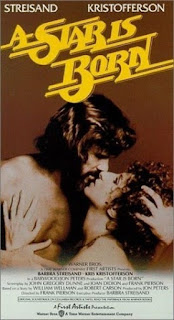 The story goes that in 1975 Barbra Streisand offered Elvis the role of the leading man in A Star Is Born, a movie she was about to make, but that the deal was nixed by our old friend Colonel Tom Parker - either on the basis that Streisand was getting star billing over 'his boy', alternatively that there was not enough money involved.

It seems in retrospect that Elvis was in fact not all that concerned about the money, but had hoped that a part in a movie with a super-star such as Streisand would have given his career a boost. In the event the role went to Kris Kristofferson.

Until quite recently I had not had an opportunity to see the movie but managed to catch it on TCM the other day, and thought it might be an interesting exercise to examine to what extent Elvis might just have missed a trick here.

The film is the story of two singers, one on his way down (Kristofferson), the other on her way up (Streisand). After one of his concerts Kristofferson goes into a night-club where Streisand is singing. He

recognizes her talent at once and starts to promote her. She sings a couple of songs at one of his concerts and receives a huge ovation - it is clear she is very quickly becoming a star in her own right.

On tour she receives the sort of adulation that Kristofferson no doubt received when he was still a super-star, but his star is now burning less brightly. Almost inevitably, he falls in love with her. She is attracted to him almost from the start, but realizes that he has something of an addictive personality and is busy destroying his career with booze and drugs (a la Elvis himself?)

Be that as it may, they marry on his ranch and complete building the ranch-house he had begun some time earlier. She continues to tour successfully, but things between them take a turn for the worse when firstly he turns up late and drunk at the Grammy Awards (where she is a winner), and secondly she catches him in bed with a young lady reporter who had gone to their home looking for an interview with her. The suggestion is that he would arrange the interview if she slept with him. Ever the resourceful one, Kristofferson persuades Streisand not to leave him and they in fact reconcile. He then dies in a car crash (James Dean-style?) on his way to fetch her manager prior to her up-coming tour.

From an acting perspective, I think Elvis would have found the movie something of a challenge, as Kristofferson is in my view really powerful as a star on his way out. The character development is well portrayed and Kristofferson is a strong presence throughout.

Given what we have got used to in the average Presley‘travelogue’, Elvis would have had to lift his game considerably to do justice to this role. Having said that however, we know that Elvis was quite capable of really getting into dramatic roles, as evidenced by his performances in King Creole, Jailhouse Rock and Wild in the Country. Also, he seemed to raise his game when paired with a strong co-star, whether of the male or the female variety - just think of his performances opposite Walther Matthau in King Creole and Ann-Margret in Viva Las Vegas. Based on this I do believe that Elvis, with the right motivation, would have been capable of a good, if not a great performance in the movie. 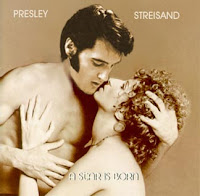 I think it also goes without saying that Elvis would have been more than capable of holding his own as a rock star on stage, and that his singing would have been at least as good as if not better than that of Kristofferson.

All in all one is forced to the conclusion that this really was a missed opportunity for Elvis, although it came at a time when his movie career was over and he was busy with his Vegas appearances in between touring.

Even so, had he accepted the challenge, who can say where his career may have gone after that? Possibly this would have been just the impetus Elvis needed and perhaps we would have seen him in more ‘meatier’ and dramatic roles - one can but speculate on what might have been.
John Webb © EPFCA
Posted by EPFCA at 14:02:00